For the last 10 years, vintage after vintage, Almaviva vineyard has been quietly, consistently establishing a track record as one of the greatest wine producers in Chile, if not all of the world. And it began the icon wine movement in its homeland establishing a global market through Bordeaux as well as keen wine importers.

The estate, which is a joint venture between Château Mouton Rothschild and Concha y Toro, has been striving for perfection since its launch in 1998. And, with the Almaviva Puente Alto 2017, they’ve achieved it. With such supreme quality and astronomic growth in reputation, it’s no wonder it’s JamesSuckling.com’s Wine of the Decade.

The wine has been a labor of love by chief winemaker Michel Friou, a Chilean industry veteran and native Frenchman who joined the single-wine estate in 2007. For his 2017 vintage, Friou selected an elegant yet robust combination anchored by 65 percent cabernet sauvignon, which is softened with 23 percent carmenere (Chile’s emblematic grape), 5 percent cabernet franc, 5 percent petit verdot and 2 percent merlot. After barrel-aging the blend in new French oak for 19 months, the resulting vintage boasts a soft mouthfeel with fresh, ripe fruits, velvety tannins and notable depth.

The intensity and structure of Almaviva 2017 come as a particularly pleasant surprise given the hot and dry weather conditions during the growing season. Yet, the winemakers overcame the dramatically lower yields and an early harvest, taking place three weeks ahead of schedule. Even with the odds against them, Friou and his team produced yet another superb vintage that embodies the estate’s first-growth expertise from Bordeaux and exceptional New World terroir – the best of both worlds.

“We have the luxury of wonderful terroir in Puente Alto [the wine region in which Maipo Valley is located]. It’s very close to the Andes, which means we always have a few degrees cooler than the rest of the valley,” says Friou. “This makes a difference in terms of the ripening process – we can get ripeness and freshness as well as very elegant, fine-quality tannins.”

Setting 2017 aside, Almaviva typically enjoys an excellent wine-growing microclimate thanks to its strategic location. Often called the ‘Bordeaux of South America’ for the ideal growing conditions for cabernet sauvignon and clutch of prominent wineries, the Maipo Valley terroir is characterized by a semi-arid, Mediterranean-style climate complemented by arid, clay soil that offers excellent drainage, minerality and low pH levels.

The 60-hectare estate can be found in the highest part of the valley, about 650 meters above sea level, where the vineyards see long, sunny days and gentle breezes, flowing down from the Andes.

When producing the annual vintage, Friou and his team harness a mix of new technology and age-old traditions to preserve the integrity of the fruit. For example, they hand-sort the grapes and use gravity-fed vinification tanks for gentle handling of the fruit. They also use an underground drip irrigation system to better control the hydration of the vines. “Today, we have a better knowledge of the terroir, which helps us make decisions in terms of irrigation and how the roots get the water, which is important in the final result,” says Friou.

It’s this gentle, methodical approach that forms the foundation of each vintage. From there, Friou must also perfect the vinification, blending and aging processes in order to create a masterpiece, such as the celebrated Almaviva 2017. The latest in a series of excellent wines, the 100-point wine pays homage to Bordeaux-style blends, albeit with carmenere as the secondary

grape rather than merlot. 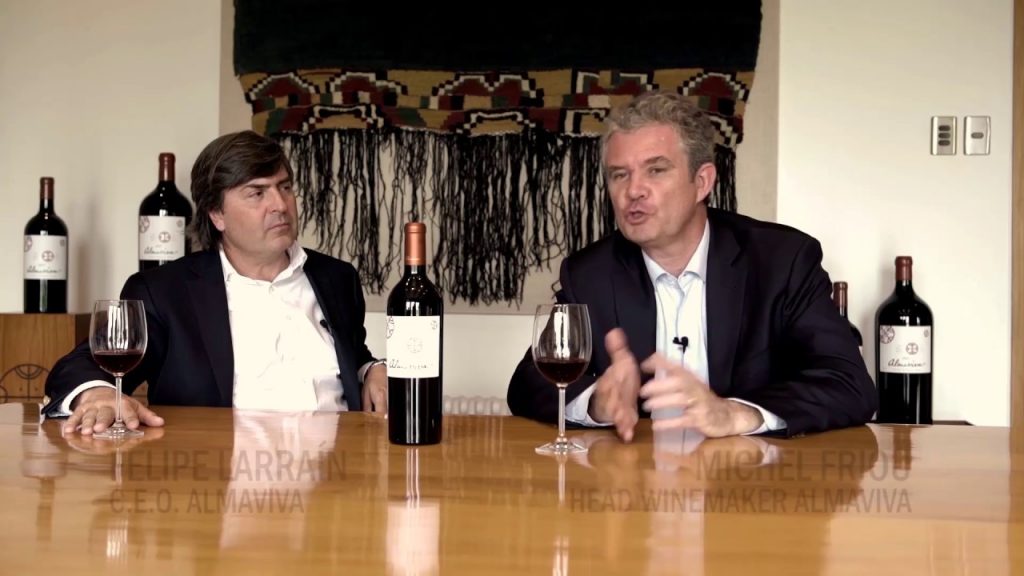 The presence of carmenere derived from a happy accident. Back in 1978, the estate originally thought it planted merlot and cabernet sauvignon vines as its two primary varietals. But, due to a nationwide mix-up across Chile’s vineyards, the estate later learned that their merlot vines were actually carmenere.

The accidental inclusion of carmenere created a unique legacy for Almaviva’s single-estate wines, which are neither wholly New World nor Old World, but somewhere in between. It works beautifully in the glass, too: the winery has scooped up several 94-plus scores from James Suckling over the past decade, achieving his highest praise twice in two years. “We are so cognizant of what we need to do to make great wines,” Friou says. “It’s about small changes. It’s all about the details.”

While Almaviva’s strong performance is, naturally, a testament to the winery’s Franco-Chilean savoir-faire, it also reflects changes in Chile’s wine industry at large. Chile is the fourth-largest wine exporter in the world, shipping 9.3 million hectoliters around the world as of 2018. It’s also one of the world’s oldest wine-producing regions, with Spanish conquistadors having introduced the first European grapes in the 1500s.

Despite a centuries-long history of winemaking – albeit with many stalls and restarts in between – the country has struggled to shed its global reputation as a mass producer of cheap, one-note cabernets. Only recently have critics perked up, as premium vineyards like Almaviva set a new bar for Chilean wines with nuanced, rigorously blended vintages that marry classic Bordeaux expertise with New World vitality.